Please see this Facebook gallery for many more pictures from the Smoky Mountain Model Convention of 2019!

I’ve posted a fair amount about large national figure shows and conventions, but I do understand that many people face constraints that make them unable to attend such events. This weekend I was able to attend a local event by a chapter of an international organization that has chapters and events all over the world, and it is my hope that this will offer hobby options to some of the people that aren’t able to make it to other events.

In case you’re not very interested in my personal experiences at my local show, I’ll just go ahead and share the information to help you find the closest group to you. The International Plastic Modellers’ Society started in the United Kingdom, and now has chapters all over the world. While the emphasis of chapter meetings and local and national contests is on plastic model kits (including Gundam and other mecha style), models of metal or resin and figures of all materials are included, including busts and dioramas. (By at least some chapters and shows, I don’t have encyclopaedic knowledge of the organization by any means!)

The historical figure subcategory at the Smoky Mountain Model Convention in 2019.

While the audience may not be laser focused on miniature figures or gaming with figures, there’s a lot in common in terms of skills and interests between the two groups. If you aren’t able to make it out to a gaming convention or miniature figure show, it seems worth the effort to do a bit of digging to find out if you have a nearby IMPS show or chapter. You might be surprised to find more recognition of and interest in figures that you were expecting – I was!

The Wikipedia page for the IMPS links to the websites for the branches of various countries. The site for the United States branch has a map and a chapter listing for all of the US chapters. And they aren’t all in the most populous states or near big cities.

If any readers have more experience with the IMPS and any of its chapters and shows, I hope that you will share your thoughts in the comments for others to learn from!

I believe this one won first place in its subcategory at the Smoky Mountain Model Convention in 2019.

I first heard of the Smoky Mountain Model Convention held in Knoxville, Tennessee three years ago via a flyer at my local Hobby Town store, but for the past two years it conflicted with the dates of another event I attend. This year I was finally available to attend on the date of the show. I don’t know a lot about the organization, or model kit making, so I wasn’t sure what I would find at the event. But the website had detailed information on the categories and rules for entering the show, so I figured I should overcome my introversion and go check it out.

This seemed like a good choice to bring both because it was larger in scale, and because I had painted it to a high display level. It ended up being an opportunity to talk with other attendees about Secret Weapon snow, as well.

I picked out three figures from my collection to enter into the show. It seemed likely that the group was more accustomed to seeing larger figures and model kits, so I selected my giantess and the Random Encounter bust as entries. I don’t have a huge collection of dioramas. I probably should have picked one that was a big larger or showier, but warm weather was in the forecast and it amused me to bring a Christmas-themed piece. (Not that I have a huge array of dioramas of any size/scale!)

I was sort of stunned to realize that I painted this as long ago as 2007! While the painting could certainly use more contrast, and the base has some issues, I am still proud of this and find it amusing.

The check in process was inexpensive and simple, particularly since I had printed out and completed my registration forms at home. I was excited to see that the entries were displayed as they are in the show format events that I’ve attended previously – out on raised tables where it is easy to get a good view of them from multiple angles. It is so much nicer for viewing than when entries are trapped behind glass and located on shelves too low or too high to be visible to the eye line of many viewers.

A view of the registration desk, awards ceremony seating area, and the table way at the back overflowing with raffle prizes.

The tables were well marked with their respective categories. I got my entries set up and then started to wander around to look at what everyone else had brought. The entries were divided into four rows of tables of overall categories, with various subcategories within those. The main categories were Aircraft, Armour, Automotive, and Miscellaneous. Subcategories might be based on scale, time period, or other factors, with all including a Junior subcategory for younger modellers. Entries with figures as the main subject all fell into Miscellaneous subcategories, including specific categories for science fiction/fantasy figures.

As you can see, the tables are raised up slightly, which makes it very easy to get a good look at the entries for most viewers. I believe this is the judging team conferring over one of the award decisions.

There was also a table for entries to the special show theme category. This year’s show theme was Wild and Dangerous Creatures, and I enjoyed the diversity of the interpretation of the theme. Entries included Godzilla (the eventual winner), Rommel, a pair of War Toon tanks, and an Arab fighter on a camel. There was also an area where the Knoxville Scale Modelers Association members could display their work outside of the contest entry area, and there was some very nice work on display. 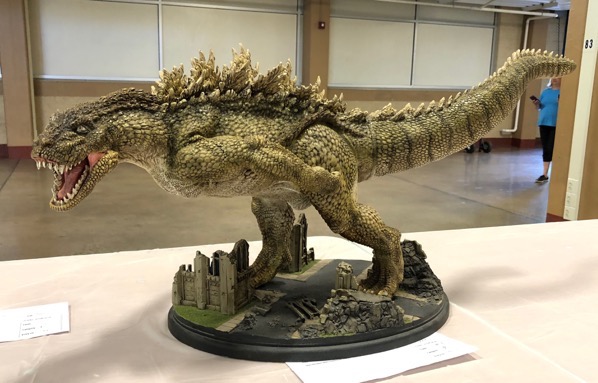 This Godzilla was the winner of the Wild and Dangerous special show theme category. There was another Godzilla entered in the SF/Fantasy figure subcategory.

The selection of figures as an overall portion of the show was low compared to vehicles and armour and such, but there were definitely figures there. And some very interesting ones, like a life-size furry werewolf head! The KSMA member area included a small display of busts, and a nice display of historical figures. I spent some time talking with the painter of the figures, David. I found that people in general were quite appreciative and complimentary of my work, and welcoming and friendly. 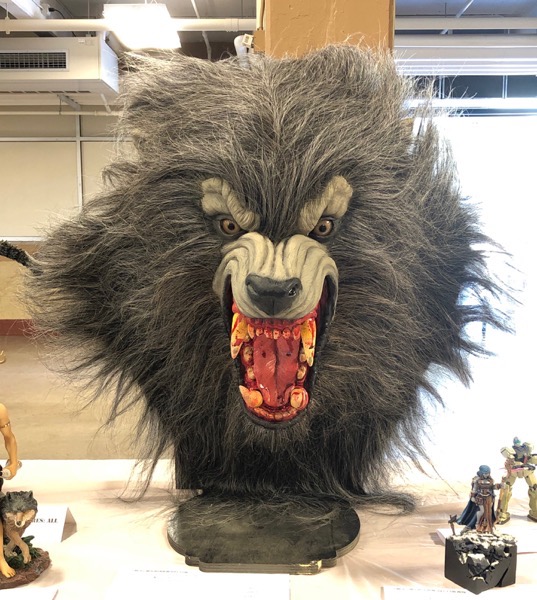 This enormous entry was very popular with viewers. 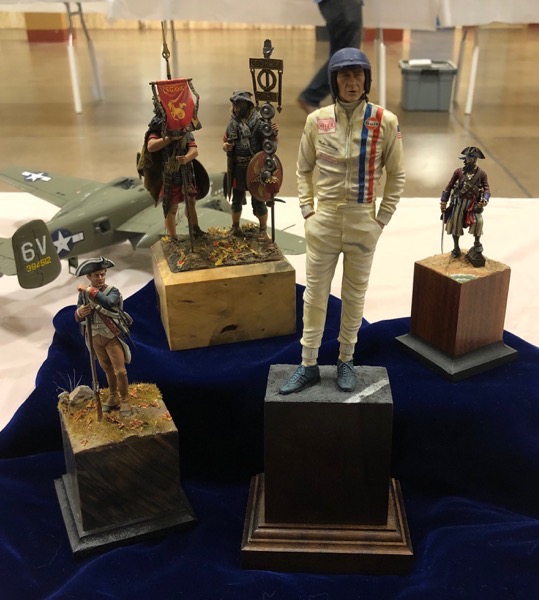 I enjoyed looking at the entries in the other categories, as well. I know I lack the historical and modelling knowledge to have fully appreciated them, but I enjoyed what I did understand. The vehicles were especially fun. Other shows I’ve attended have featured armour, aircraft, and nautical vessels, but I haven’t seen a lot of automotive vehicles elsewhere. Modellers use some terrific looking paints and finishes on those cars. There were also some fun examples of weathered old junkers with lots of little Easter egg tidbits to look for in and around the vehicle. There were two very fun automotive dioramas, as well. One was a recreation of a classic 50s ice cream stand. The other was commentary on the features and bugs of Ford vehicles.

So many little details to enjoy on this old truck, as well as the weathering.

There was a small vendor area that I only perused briefly, and that did seem to be completely focused on model kits. I imagine there is a bit of variation in the vendors that attend in different regions and countries, however. The club also ran a raffle for a table full of prizes.

This ice cream stand diorama won in its subcategory at the Smoky Mountain Model Con 2019.

This Ford diorama was also a very fun entry in the automotive diorama subcategory.

When it came time for the awards ceremony, I was very honoured by the recognition my work received. I was awarded first place in each of the three subcategories I entered, overall Best of Miscellaneous category, and Best of Show! I had not expected anything like that when I decided to go to the show. But even had I not won anything at all, it still would have been very worthwhile for me to attend as an opportunity to meet local enthusiasts of my hobby.

This was one of my favourite entries in the show. Those of us with a hobby and a spouse/partner have all been there, I imagine! The subtitle reads “You are not bringing anymore model kits into this house.”

During the awards ceremony I realized that I had gotten sidetracked on my rounds of picture taking and completely failed to take pictures of the armour category row. You would think that at a smaller show I’d be able to finally get pictures of everything, but alas, I have once again failed! You can see all of the pictures I did take over in a gallery on my Facebook artist page. 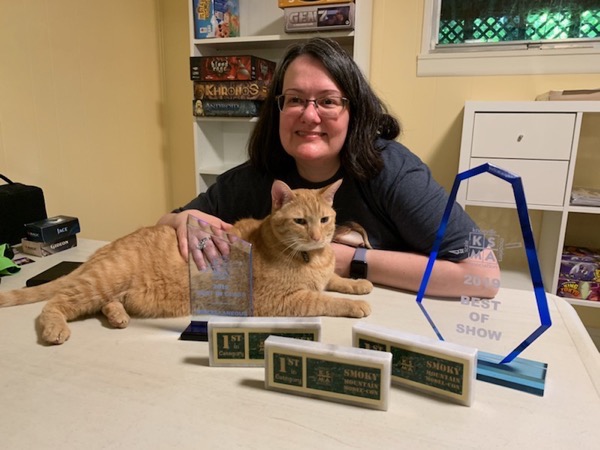 I did not expect to be awarded to this degree. I am very honoured, though I think my cat is unimpressed.

I sadly lack knowledge of the many model kits featured in these pictures to be able to help you find them. I am also not familiar with most of the historical miniatures that were shown at the convention.

Frost Giant Queen, Reaper Bones plastic.
Random Encounter bust, resin, gift with purchase from FeR Miniatures.
Mrs. Claus is a Hasslefree miniature. I thought she was still available, but I could not find on the site. Perhaps she is only sold at Christmas.
The naughty creatures is a Waggamaeph, produced by Crunch-Waffle Enterprises, which is now out of business. Noble Knight has some Waggamaephs on resale, but not this figure by the look of it.

4 thoughts on “IMPS – Models (and Miniatures) Closer to Home”