We may not always think of it this way, but one of the cool things about our hobby is that it is such a collaborative process. Unless you sculpted the miniature you painted, you are in a sense working with at least one other artist – the sculptor. And they often base their sculpting on a character design drawing or painting, or a concept idea from an art director or game. Often the miniature painter is the last link in a long chain of creativity!

Often we painters choose figures to tell our own stories or purposes and we do not aim to follow along with the colour scheme or characterization concept that the people who made the miniature thought up. It is a lot of fun to just let your imagination run free in bringing a character to life. It can also be fun, and instructive, to paint to match a painting or drawing. One of the most interesting parts of working for miniature manufacturers is the opportunity to do that now and again. But you can give it a try, too! You can paint a figure like this Sophie that I am going to discuss, where you have access to the concept artwork and ‘official’ colours. Or you might find a figure whose pose and characterization kind of reminds you of a piece of favourite art. Even though the figure might not be exactly the same, you can still paint it to try to match the artwork.

ReaperCon Sophie 2018 began as a sketch by Izzy “Talin” Collier. The figure was deftly brought to life by Bob Ridolfi, who I think captured both the pose and the mischievous spirit of Reaper’s succubus mascot very well. While Izzy was working on adding colour to the original sketch, she ended up taking it a step farther and drew a whole new piece of artwork showing the same figure in a seated position. Had I world enough and time, I would have loved to be able to try to add some of the new elements like the mask to my conception of the miniature, but alas it was not to be.

What I did have to work to match was the specific colour palette. Painting to match 2D art can be a very interesting and instructive exercise, and I recommend it to anyone looking to stretch their painting skills. One element is simply matching the colours. Picking out or mixing colours to match colours in a picture or photograph is a great exercise for getting to know your paints better and start to learn colour mixing. Before I put any paint on the figure at all, I spent some time testing various mixes of the main colours. I tested shades and highlights, not just the midtone, as these can have a lot of impact on the mood of a piece, and it is preferable to make choices that can be included in several areas to try to create more unity.

Since I was on a tight deadline, I wanted to use premixed colours as much as possible to keep things simple. I didn’t have too much trouble finding colours for some of the areas like skin and hair, but I tested a lot of different blues to see which would best match Talin’s colour artwork. For each of the blues I added a little water to part of the swatches. Often you can better see the intensity of a colour when you thin it down.

Another consideration to make is whether you can, or should, copy the colour scheme of the inspiration art precisely. The inspiration art may not have enough variation in value (lightness and darkness), or the way that the colour scheme works so successfully may depend on elements that are included in the source art but not in the miniature representation of it. For example, you might have art with multiple figures and you’re painting only one. Or even just the effect of the colours in the background can have a lot of impact on your perception of the colours on the figure. Your end goal is to make an effective piece of three dimensional art that captures as much as possible the appearance and spirit of the two dimensional art it’s inspired by, and sometimes you have to make tweaks and choices to accomplish that goal.

In this case, the artwork and figure are pretty closely matched, so I didn’t have to make a lot of tough decisions. But I did still choose to make a few tweaks. The most obvious one is that I added a much stronger directional light effect. That’s something I’ve been working on in general, and which I think helps a 3D piece be a lot more interesting to look at. The second is a lot more more subtle. I’ll put the artwork and figure side by side below so you can see if you can spot it. 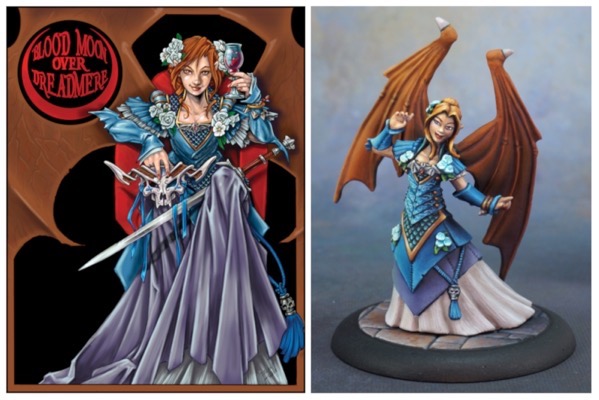 My change is pretty subtle, don’t feel bad if you missed it! In the seated artwork, Sophie has a goblet of red wine (or is it wine…), she’s seated in a red chair, and there’s some red text over her shoulder. The only element that is red that is part of the sculpted figure is a small gem on the silver bat on her bodice. Have one tiny thing a completely different colour than the rest of the figure is not a good choice to make for strong colour composition. So my choices were to change the colour of the bat, or find ways to add more red. I chose the latter, and used the same reds on her lipstick, blush, and nail polish. In the artwork those are coloured more to match her hair. Very likely I should have painted some of the bracelet elements with reds as in the original art to tie in a bit more red again. Alternatively, I could have chosen exclude all use of the colour red and instead used the green from the flower leaves for the bat’s gem and painted her lips and nails the same colours as in the artwork. Since there were so few areas to work the red into available to me, this might have been the better choice from the point of view of colour composition.

ReaperCon Sophie 2018! Sophie is a limited figure. You don’t have to go to ReaperCon to buy one, but she will only be available from Reaper’s website for the duration of the show. (Possibly a little later, but I don’t know for sure, so put the dates into your calendar if you want to be sure to get one – August 29 to September 2 2018.) Go to this site to buy one on those dates: http://www.reapermini.com. In the meantime, here are more pictures of my painted Sophie. 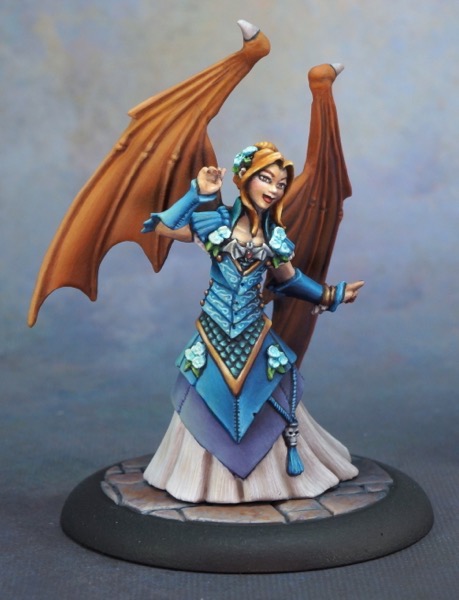 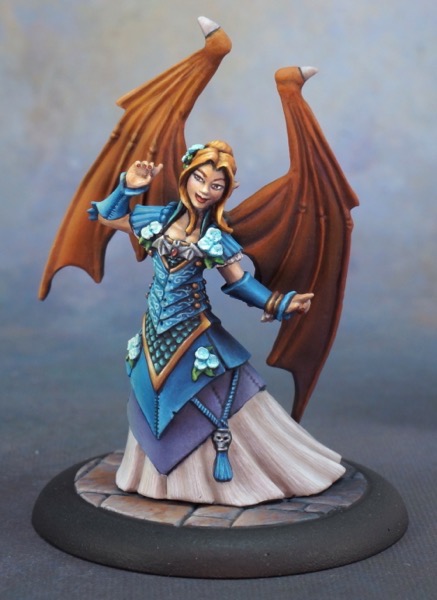 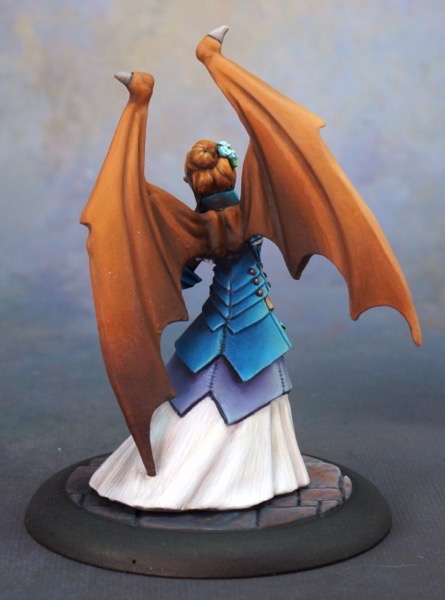 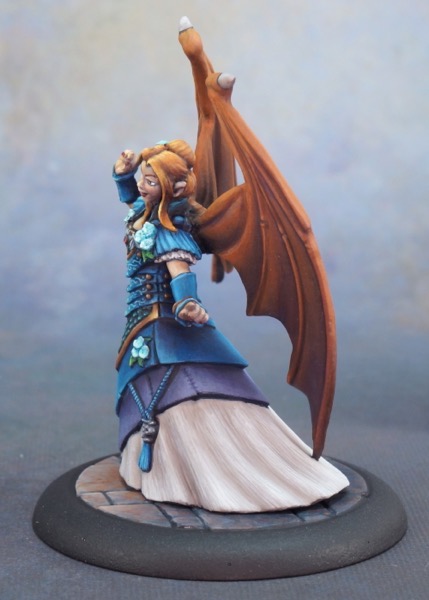 I usually listen to audiobooks or ‘watch’ streaming programs while I paint. I don’t generally make any attempt to match what I’m hearing to what I’m painting, but I enjoyed the coincidence of listening to some scenes featuring Daes Dae’mar, or the great (and deadly) game of politics in the Wheel of Time series while painting this figure. Sophie is dressed perfectly for noble machinations, and I have no doubt she would be great at the Great Game!