I travel to several conventions and shows each year, but one of the most unique conventions I take part in happens in my own backyard. All of the proceeds from the Save versus Hunger convention are donated to the Second Harvest Food Bank of East Tennessee. The convention even takes place at their facility! Thanks to some very special people, this year we had a unique miniature available for sale at the convention – Sprout von Harvest II. There are a few copies of the figure left, so if you’re a Bobby Jackson fan or want to support a good cause, you can get your own copy of Sprout von Harvest II right here!*

My colour choices for the figure were guided by the logo artwork of the convention. This is a classic triadic colour scheme using the primary colours – red, yellow, and blue. Since Sprout is a warrior figure, I went with a slightly muted, more military blue. I also aimed for a slightly muted yellow, with some yellow ochre tones rather than pure sunny yellow. I finished the colours off with a rich red. Typically when you use a colour scheme like this, you should not use the colours in equal proportions to one another. For this figure, blue is the dominant colour (blues were also used in the shading of the metal armour), red is secondary, and the yellow is an accent colour.

Sprout’s shield is the logo for the Save versus Harvest convention.

I painted up a copy of Sprout partly to be able to take pictures for promotional purposes, but also with the intention of including it as a prize on the Save versus Hunger raffle table. This is a big table of cool geeky prizes like board games and role-playing books, and cool handcrafted geeky decor and such. Since I wanted Sprout to make an impact in person and to appeal to an audience of role-players, I chose to paint the figure with metallic flake paints.

The majority of figures I paint need to photograph well, so I usually choose to paint non-metallic metals. Figures painted with NMM tend to be much easier to photograph. Real metallics require a lot more fiddling with the light and repositioning of the figure to try to catch a picture that matches what you see in real life. I had a lot of fun painting metallics on Sprout, and I hope I am able to do it more often! I used the same principles that I used when I paint NMM in terms of determining where to place shadows and highlights. I used layers of thinned matte paint to paint in the shadows, so that the areas that are darker also reflect less light. I used a slightly thinned brighter metallic silver paint to paint on highlights. Since metallic flake falls out of suspension really easily, I thinned down the silver with Reaper’s Wash Medium instead of plain water. Wash Medium is largely the binder part of paint and has a higher viscosity than water, so it keeps the metallic flake floating in suspension. You can use Reaper’s Brush-On Sealer in a similar way.

You can see what I mean about photographing metallics in this view. If you compare it to the other angles, the shading on the sword looks both rougher and less apparent here. The helm doesn’t look great, either.

I wanted Sprout to have a noble warrior in shining armour type of vibe, but when I finished the main painting, the figure seemed a little TOO fresh and newly-minted. So I added some glazes of a dark dirty brown to the recesses of the metal areas. (By a glaze, I mean paint thinned down to being pretty much coloured water, which was applied in thin controlled coats to the desired areas.) I also painted in scratches and damage on the shield and armour.

I aadded some dirt and mud along the hem and in a few other places on the cloak, since that fit in with the environment of the base. I started with the lighter brown, thinned down until it was semi-transparent, and applied it by brushing and dabbing it on over the area of the hem, and a few dabs higher up the cloak. I went over that with a few coats until I thought the coverage and placement of the older dried dirt looked good. Then I used a darker brown for fresher dirt. This was also thinned to be somewhat transparent, and dabbed on just along the bottom edge of the hem. 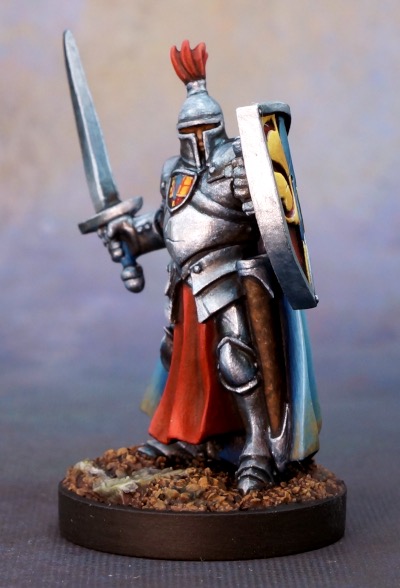 You can only just barely see them, but Sprout does have some facial features hiding in that helmet! Also another example of the challenge of photographing metallic paints – the sword shading looks better in this picture, but the light reflection off the facing edge of the shield is far too bright!

One lone figure on a big table of cool looking raffle prizes wasn’t likely to stand out, so I was excited when Sean Fulton generously offered to paint some opponents up for Sprout to battle. We agreed that ghouls worked well as a metaphor for hunger. He did a fantastic job on these gross and creepy monsters for Sprout to vanquish. Sean additionally donated a great set of painted resin bases that the winner can use for whichever miniatures she likes!

I’m not great at gore, so I’m glad Sean Fulton painted these as they look much creepier than if I had!

I don’t think Sprout will find this an easy fight…

These figures are a lot smaller and more fragile than the items usually displayed on the convention raffle table. I pondered for a while about how to present the figures to best advantage as well as keep them safe. I settled on the idea of a plastic display case, which I purchased from a hobby store. I made a black backdrop from foam core board, which doubled as a a sign where I could included enlarged photographs for people to better see the figures. 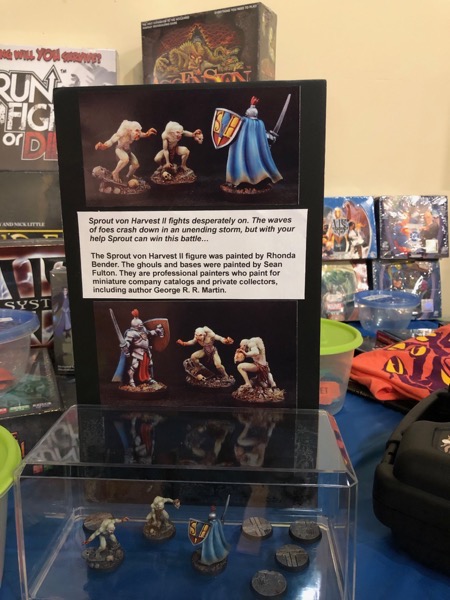 I stuck the slotta bases down with poster tack, and the flat base with double sided mounting tape. I brought bubble wrap and a box along to the convention to be able to pack everything up safely for the winner to safely transport home.

Sprout von Harvest had a very limited production run. If you’re a collector of cool Bobby Jackson figures, stalwart knights, or just want to help a good cause, you can get one for yourself while supplies last at this site: Save versus Hunger store.* All proceeds from sales of the figure and the other items on this store page will be donated to Second Harvest Food Bank of East Tennessee. 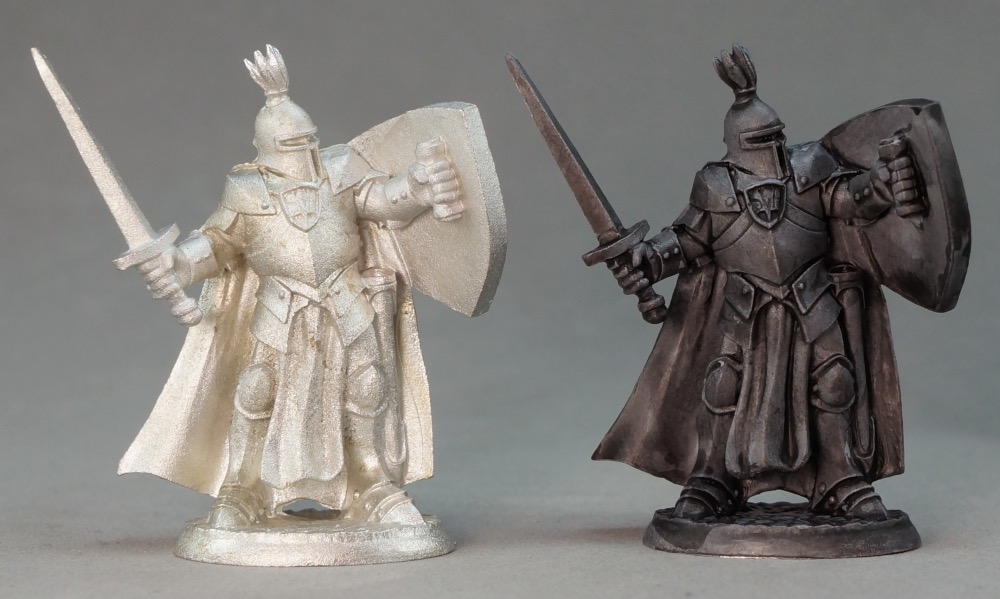 Sprout is a pewter metal miniature in standard gaming scale. In these pictures you can see the bare metal, and a primed and black washed version.

*NOTE: I’m not sure if the Save versus Hunger store admins have figured out shipping rates as yet. There’s an email address on that site you can contact if you have questions about the shipping.