I chose miniature painting as a hobby in part because painted figures could be used in games, but I was attracted to the techniques and approach of display painting from the first. My initial attempts to learn drybrushing and washing were frustrating so I skipped ahead to learning layering after a couple of miniatures. I didn’t really start with a solid foundation in tabletop painting techniques or painting for speed.

Many years later I was asked to participate in the Ace of Aces charity speed painting contest at Gen Con. I spent some time practicing speed painting so I would be able to do a decent job for charity. A few years after that I worked on an unreleased project that wasn’t exactly standard tabletop painting, but was a lot closer to that than to display painting. I’m still no tabletop/speed painting wiz. I am regularly astonished by what people who are well-practiced at quick painting can produce in one or two hours! But I found I learned a lot from both experiences, and that what I learned could improve and inform my regular painting practice. 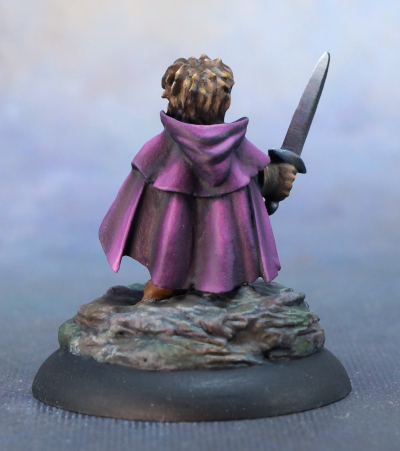 Painted with the Pathfinder paints, which include some terrific pink and purple colours.

For a while now I’ve been meaning to do something like once a week take an hour or two to speed paint a mini. I didn’t quite do that with this figure, but it is something along those lines. I sat down with the intention of spending two hours, and ended up spending four hours or so, with a few touch ups the next day, so somewhere between five and six hours total. For me that is pretty speedy. :->

The figure is Stitch Thimbletoe, halfling thief. I painted it to use for my character for a long-running game with some of the other Reaper painters and sculptors. We play a few times a year when we meet in person. For years I used a half-painted female dwarf figure, and people at the table would forget that my character is a halfling. Stitch fit the character concept pretty well apart from being male, so I decided to go with that figure and assume that there are boyish build halfling women just as there are boyish build human women. I track the party treasure on my character sheet, so a figure holding a little sack was a perfect touch!

If you’d like an idea of what it would be like to play with this group, a subset of us are playing a bimonthly game on the Reaper Twitch channel, and the first full session is up on YouTube now. The sessions are hosted by Frank at Knight Heart Gaming. Complete with fancy boards and thematic music! It is very cool. I should have another quick paint post up before too long because I’ll need to paint my character for that game if I want to be as cool as the other players. (Or not, since some of them also sculpted their own figures…)

Stitch was sculpted by Bobby Jackson, who is one of the other players in the game. He loves halfling characters, and I think that shows through in this charming sculpt! The figure is sold with a small treasure chest. The other players in the game think we have a treasure chest amount of party treasure, but really we have more of a small sack amount, so I left the chest off my base. ;-> If you check Stitch out on the Reaper online store you’ll see the version that Brice Cocanur painted with a fantastic glowing sword effect as well as the chest.

The knight is standard human scale. And also one of the figures I painted as speed paint practice!

I also used this as an opportunity to try out the new Pathfinder Paint colours. Most of the paints used were Pathfinder colours, with the addition of Blue Liner and the new Bones HD Elven Green for mixing darks. I think I used a little Palomino Gold for glazing the sack as well. I mixed my own greys for the sword and rocky base by mixing Elven Green with various of the dark pinks. (Mixing complementary colours like green and red creates interesting neutral colours that work well with the colours already on the figure.) Michael Proctor of Clever Crow Studio sculpted the base for me. He’s a terrific painter, and he’s sharing his wisdom in painting videos now!