Every year I mean to do something like this fairly early. I’m remembering to do it this year, though not exactly early. ;-> 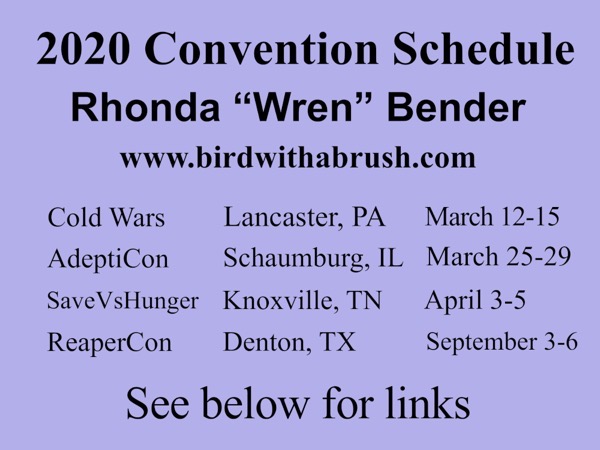 Registration is currently open for Cold Wars. Check back occasionally for scheduling of and tickets to classes. Look in the Hobby University section under Games/Events. I am planning to teach the following topics:

Registration is open for AdeptiCon, and you can sign up for classes until February 28, 2020.

Of the classes I am teaching, I still have tickets available for my Critique Clinque class. The aim of this class is to help you better understand critique you receive on your miniatures, and to improve your skills in assessing figures yourself. Both of these should help you discover ways to improve your own figure painting. We will definitely be talking about how ‘needs more contrast’ is a statement a lot more complex (and interesting to solve) than just higher highlights and deeper shadows.

Tickets for my other classes have sold out. However, it is surprisingly common for one or two people to fail to show up to classes. If you are interested in one of these (or a class taught by any of the many, many fine painters who will be attending), you can show up at class time with the fee for the class in cash, and if we have room, we will be happy to add you to the class! If I have an extra mini or two (and I usually do), I will sneak one or two extra people in even if all the registered attendees sign up.

I have written a general overview of AdeptiCon in the past. If you want to learn more about painting miniatures, this is one of your best options in the United States. Dozens of amazing painters teach classes at this convention. Note that the Crystal Brush competition ended as of last year. This year the focus is on manufacturer hosted painting contests, including the United States return of Golden Demon, and Creature Caster’s competition.

Save vs Hunger is a small convention local to me. It is a fundraiser for one of my favourite charities – Second Harvest of East Tennessee. The focus of the convention is on role-playing game sessions, but there is also a board game library, and a few other activities. I host a paint and take table. People are welcome to bring their own figures (and other supplies) to work on as well. David Cecil has kindly donated his time to run a couple of painting for tabletop classes (times TBD), and he and I will both be available to answer questions, do short demos, and offer critiques.

Registration for ReaperCon opens on February 14, 2020. Class tickets are not yet on sale.

I have not yet submitted what I will teach at ReaperCon. I am thinking about teaching OSL and Blending: Cheat Code Unlocked. That class features a method for achieving smooth blends that involves starting off with layering, and then using acrylic retarder to refine the blends as you would with oil paint. (Sort of a way to do wet blending where the paint stays workable for a much longer period of time.)

If you are attending ReaperCon and there is a class topic you would be interested to see me teach, please let me know and I’ll see whether it’s feasible for this year!

ReaperCon is an amazing convention for anyone interested in learning more about painting miniatures. There are dozens of instructors teaching hundreds of classes of all levels and topics. When they aren’t in class, the instructors hang out in the artist area at tables with name plates, so you can seek them out to get some feedback, or ask about their tools and techniques, or just say hi and admire their work up close and personal. ReaperCon is not just for painters, either. It offers the largest slate of sculpting classes and access to sculptors that I know of, both digital and traditional.

You do not have to be a Reaper fanboy to attend. Miniatures by any manufacturer (or that you sculpted yourself) are welcomed into the MSP open contest. You can talk about and use other company’s products. Plenty of other companies are on-site in the dealer hall!

If you or your friend/relative/partner enjoy something other than miniature painting and sculpting (what, why?), there are also sessions of RPG games, miniatures games, a board game library, and a small video game/pinball arcade. Costumes are welcome – this year’s theme is piratey.

This is going to be a bit of a departure from my usual blog post topics. I’m going to mention some miniature related stuff, and a convention, but I’m also going share my personal thoughts about some pretty special people. I try not to go on about it too much online (or even in person), but I’m not always the most positive of people. Sometimes it seems like every day brings another piece of news that shakes my faith in humanity a little bit more. But recently I have found my crumbled faith being built back up by the altruism of a number of people I know. Some are good friends, others I don’t yet know very well, but all have shown impressive compassion towards myself or other people in a way that has profoundly touched me. (And in many cases in ways that relate to miniatures or general geekery, so this a little related to my usual topics. A little. ;->)

Convention season continued for me this past weekend, but this one is a little different than the others. For one, the convention is local to my home town of Knoxville, Tennessee and I didn’t have to travel. But what really makes Save versus Hunger stand out is that all of the proceeds of the convention apart from operating costs are donated to Second Harvest Food Bank of East Tennessee. The convention is even held at their facility! (Which is a former furniture showroom/warehouse they rent out for banquets and such, so it’s actually a pretty nice environment.) The convention is primarily for role-players, but my husband and I help out to provide some other activities people can enjoy. I run a miniatures paint and take table, and he sets up a library of board games for people to play.

Meet Sprout von Harvest II, brave hero and wielder of the Save vs Hunger shield. Sculpted by Bobby Jackson.

Last year one of the convention organizers suggested that it would be pretty nifty to have a custom miniature for the con. Although I do know some people in the miniatures industry, it seemed like quite a long shot to ever get a figure made. And yet, it happened! Bobby Jackson did a fantastic job sculpting this piece, which turned out exactly as we all had hoped. And Ron Hawkins from Reaper Miniatures helped me to get it cast, even though Reaper no longer does contract casting work. I’ll share a little bit about the painting of this figure in a future post, including the front view. :->

Bobby Jackson didn’t just sculpt the shield to look like the Save vs Hunger logo, he included a teeny tiny version on the chest plate of the armour!

While a collectible unpainted miniature is a new addition to the convention, traditionally Save vs Hunger also has a show stopper painted miniature available as a prize on the raffle table. The raffle table is full of geeky delights like games and dice bags, and ticket sales are a big donation generator at the con. Usually Cera Smith (who also does cool Magic card repaints) contributes a giant painted dragon that drives a lot of raffle ticket sales. Unfortunately she was not able to do so this year. I wasn’t up to painting a dragon, but I thought a painted version of Sprout ought to be in the raffle. And since that wasn’t much of an offer compared to a whole dragon, Sean Fulton stepped in to help beef up the prize offer. He contributed two wonderfully gory ghouls for Sprout to fight, AND a pack of very well painted resin bases! And he also donated some new brushes to the paint table! That’s on top of all the charitable work he does with the Nova Open Charitable Foundation. (And if you’d like a chance to buy raffle tickets for charity where you can  win some amazing painted miniatures, you will want to check out NOCF!)

Sean Fulton did a fantastic job painting these ghouls up to be super creepy and gross.

With a special con miniature lined up, I thought that the paint table at Save vs Hunger would be even busier than usual. And I worried about that, because most of the local friends I was hoping could help me out were unavailable. Even some of the non-locals who’ve come in the past had other commitments. Once again some wonderful people stepped up. Erin Hartwell (Corporea in the miniature world) drove all the way over from North Carolina, as she has done several years in the past. And this year we were able to offer miniature painting classes for the first time ever thanks to David Cecil (LordDave) coming in from Louisville, Kentucky. (If you’re into mini painting and near Louisville, check out the great painting group they have in the area – Llama!)

Here’s a pic of David Cecil reaching into his literal bag of tricks during one of the painting classes.

I also put out a call for help to our local Knoxville painting group (Knoxville Area Miniature Painters, aka KAMP), and I got a great response. Thank you so much Kristen, James, Brad, and Tammi. It was wonderful to get to know you all, and I really appreciate your help this past weekend. And a big thank you to all of the people who came out to paint, play, eat, and buy raffle tickets in support of the cause. My husband and I have a variety of charitable interests, but being able to use our personal passions and knowledge to help raise money to feed people in our local community is very meaningful to us. I am deeply moved by the friends both near and far who contributed to the effort this year. (And in years past, of course!) Thank you!

The final total raised this year was announced a few days after the end of the convention. $19,311! I believe that exceeds last year’s total by more than $1000.

My husband and I have been very fortunate to have been helped by friends on a more personal level lately, as well. One of the distractions that’s been keeping me from getting back to making meaty blog posts is that our home suffered some damage in the flood rains that hit the South a few months back. Our damage was pretty minor compared to what many suffered, but more than our feeble non-handy abilities could deal with on our own.

Our rec room flooded along one wall. Everything had to be moved to pull out rotted shelves and rip up the carpet. Which was made more difficult by the fact that planned house repairs meant we had even more stuff in the room than usual.

We have been very fortunate to have friends who do know what to do who have generously shared their knowledge, tools, and most of all, precious time to helping us not only damage control, but even upgrade and improve the room. (Begone horrible 70s decor!) I want to shout out our thanks to Trip, Norm, Nathan, and Astra. It means a lot to have you use some of your precious non-work hours doing such hard and tedious work to help us! 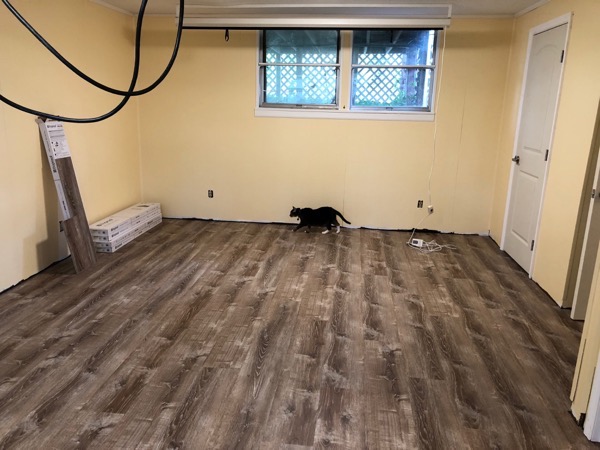 It’s not quite done, but what an improvement already! New paint, new floor, new doors. Same old cranky cat, though. This flooring is waterproof. Just in case…