As a conservative estimate, I’m going to guess that 80% of the miniature painters reading this (and 100% of the person writing it) have received feedback that their miniature ‘needs more contrast’. Contrast is the real bugbear of our hobby, more fearsome by far than the monster so named! I recently worked on a miniature that gave me a perfect example of what more and less contrast look like compared to one another.

Usually when miniature painters refer to contrast, they mean the range of contrast between the darkest value of shadow in an area, and the lightest value of highlight. There are actually upwards of a dozen different kinds of contrast you can use to separate different areas of a figure and draw attention to your focal point(s). I hope to be able to go through most of those in future posts, since many of them are overlooked by miniature painters. But as true as that is, it is also true that the range of contrast between highlights and shadows is vital in miniature painting, and something that is an ongoing struggle for most of us. I’ve been fighting to get more contrast into my painting pretty much since day one!

The figure below is a Victorian era miniature that is one of a small set. I started painting her at least three years ago, possibly longer. I was pretty happy with her at the time of painting, particularly with her face. I knew she needed another colour somewhere, but I put that and the figure aside since I wanted to have all of the figures in the set mostly painted so I could work on all of the bases together. While I was at ReaperCon, I started painting one of the other Victorian ladies. And when I came home and put her beside this older one, it really struck me how much duller and less contrasted the older one looked. So I decided to do a little work on the older figure. 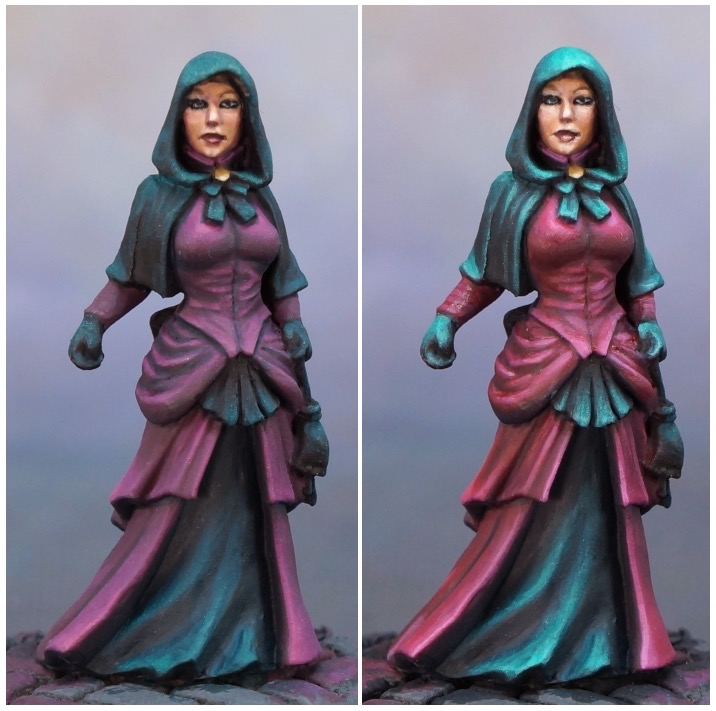 On the left, the figure as painted in 2015 (or earlier). On the right, the figure with a few hours of touching up to add more contrast. Revising the painting of a figure like this is a much less scary prospect than I once thought it was. Once you have your basic values established, it’s not as tricky to go in and fiddle with colour or adjust contrast as you might imagine.

I’m hoping that this is a pretty good demonstration of what we mean by ‘needs more contrast’ and ‘darker shadows, lighter highlights’. Of course there is a certain amount of to taste with this. There may be those among you who feel that the revised version is too highly contrasted. But I think most of us will agree that the original version is just too blah. The face isn’t too bad, and the contrast between the light colour of the face and dark colour of the clothing really helps it to stand out, but the details of the folds and ribbons in the cloth get lost without the contrast.

The sculpted detail is a lot more apparent with the greater contrast between highlights and shadows.

You might also note that the blending on the revised one isn’t perfect. I’m working on having more than one style of painting. I’m trying to develop a level that I hope still looks good, but takes less time to execute. There are so many things I want to paint! The contrast is more important than the blending. Photographing painted miniatures and sharing them on online makes it easy to forget how miniatures are most often viewed and used – at arm’s length. Whether it’s an entry into the Crystal Brush or your character mini in your favorite role-playing game, the first task of a paint job is to make the character of the figure and the various items and elements of the sculpt visually apparent at two feet away. The photo shown above is 4-5 times larger than life size. Let’s take a look at this figure again at something much closer to life size.

Well, that really puts things into a different perspective, doesn’t it? Whether you’re entering a figure into a contest or plunking it down on a table, you want the paint job to wave at the viewer from a distance and say hey, look at me closer!

Ideally a paint job will have qualities to be appreciated at both distances – at arm’s length, and up close and personal in the hand or in a photograph. So working on blending for smooth areas and other cool textures for different materials is very important. But if you don’t have enough contrast to grab the viewer’s attention, they’re never going to take a close enough look to fully appreciate all the other things you’ve worked on in the figure.

One more set of pictures that might help view the contrast changes in a different way. I first worked on the face, using paint I had on the palette for another figure. The next session, I touched up the dress. I apparently forgot the colours I originally used and didn’t write them down as I usually do. But since I was in the ballpark and matching values, the fact that I was using different colour mixes didn’t cause me any real trouble in doing the touchups. I could go over it with a glaze to shift it closer to the purple it originally was, but I’m waiting to see what colours I end up using on the third Victorian lady before I take that step. Lastly I went back over the teal portions of the figure. I still need to introduce a third colour and do some final touches, like adding a bit more colour variation to the face, but I figured it was would be more helpful to people to compare the original version with a version painted to the same stage rather than fully completed. 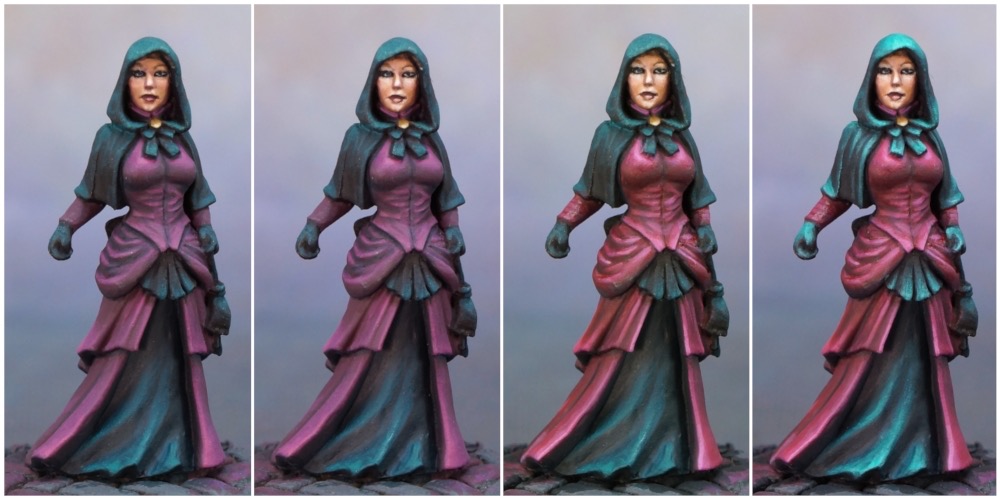 Hopefully that is a helpful insight into what a miniature looks like with more (or less) contrast. In my next post (or the one after that), I plan to go over a few suggestions for methods you can experiment with to increase the amount of contrast in your own work.

What are your experiences battling with the contrast bugbear? Or are you that rare painter who doesn’t get told they need more contrast in their work? Let’s talk about contrast in the comments!

This figure is available in metal along with a second Victorian woman: https://www.reapermini.com/search/victorian/latest/50327
The base was made using a herringbone brick press mould: http://happyseppukumodelworks.bigcartel.com/product/herring-bone-brick

6 thoughts on “Compare and Contrast”