Throughout 2018 Reaper Miniatures has been running a monthly promotion. For each $40 spent through their webstore, the buyer receives one free Dungeon Dweller figure of the month. These figures are also available for purchase throughout the month and going forward. They’re not limited edition, just a bonus for buying through the site. For me, one of the coolest things about this promotion is that each of these figures has been painted by a different painter, and each has a free PDF painting guide available via Reaper’s site. This gives you the opportunities to have insights into the working process of a wide variety of painters. There’s even a free dungeon adventure available!

There is one double-up of painters throughout the dozen figures –  I painted the February figure, and just recently I also finished the December figure. I’m still putting the finishing touches on the painting guide to go with it, but in the meantime thought I would share a little bit of the painting process here. First here, are some pictures of the completed figure. 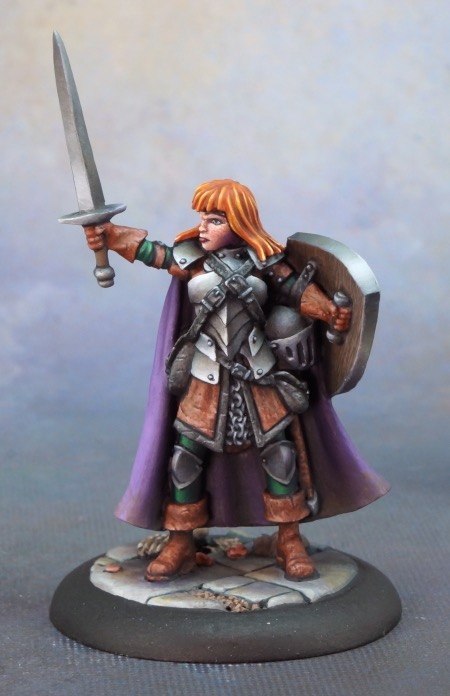 I chose not to use any of the pre-painting techniques to build contrast that I talked about in my contrast series. I did, however, pose the miniature under a strong light source to take photos I could reference while painting. (Here’s a link to the contrast painting techniques post: https://birdwithabrush.com/2018/10/16/how-to-paint-contrast-hands-on/) 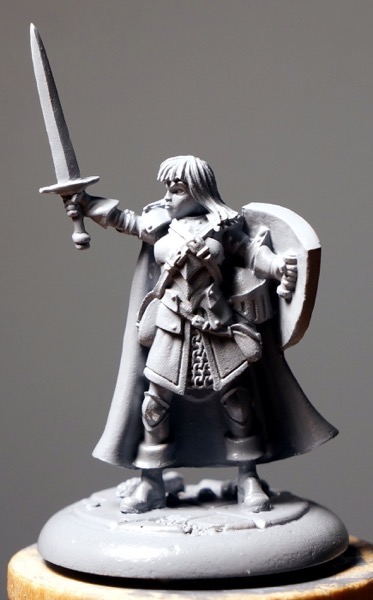 When applying paint to the various areas of the figure, I began by roughing in the main highlights, shadows, and midtones. I did not worry about small details like rivets or finer folds, or things like pulling out the edges. My goal was to the capture the big picture areas of light and shadow as depicted in the reference photos. However, I was also conscious of the fact that not every material reflects light in the same way. The figure in the reference photo is one single material – primed metal. But in painting the figure I was trying to create the appearance of several different materials – metal, leather, cloth, skin, hair, etc. So I had to consider the nature of each of those materials and factor that in to the appearance of light and shadow upon them.

Here are some work-in-progress pictures to illustrate how I approached this process when painting the non-metallic metal areas of the figure. 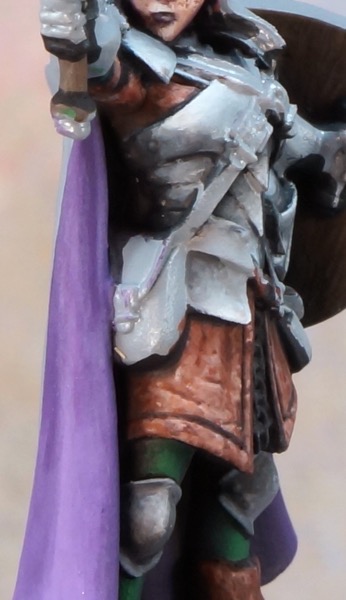 You can see that I’ve ignored details such as the rivets and the dark shadow lines between the plates. I’ve done some rudimentary wet blending while applying the paint, but I’m not overly concerned about a smooth finish at this point, either. My goal is correct and effective placement of the main shadows, highlights, and midtones.

Once I establish the placement of the main shadows, highlights, and midtones, then I can start to refine. First I work on cleaning up the blending and refining the shadow and highlight placement. Then I pick out the details like the rivets and the shadow lines between plates.

Another view of the process. You can see how the placement of the shadows and highlights is influenced by the shape of the objects. The highlights appear to one edge of flat planes like armour plates, but as more of a bullseye circle on the round form of the helmet. Some kneepads are sculpted with a rounded form and would be painted more like the helmet. The kneepads on this figure have a ridge down the middle turning each into two different faces. Placing the shadow and highlight in opposition on planes that meet like that helps create the illusion of shininess. If you scroll back up to the finished figure, you can see that I did the same thing with the sword. This was particularly helpful on the kneepads. I kept those relatively dark so as not to compete with the main areas of interest on the figure (and due to their position), but I still wanted them to ‘read’ as shiny metal. Juxtaposing very dark shadows with lighter areas helps create that illusion.

Smoothness and detail can seem like the important elements, but they won’t have any substance if the choices for placement of highlights, shadows, and midtones is incorrect, or if they lack sufficient contrast to represent the depicted material.

Hopefully that peek into the painting process was useful. I’ll be detailing the exact colours I used and talking about painting red hair and freckles in the painting guide that will go up on the Reaper site. If you’d like to grab a copy of Caerindra Thistlemoor of your own, you’ll find her at the link below. Though Reaper is about to unveil their 12 Days of Reaper special promotion, so you might want to wait a day or three…