This is an excerpt from a class I’ve been working on. In the class I critique miniatures I’ve painted throughout my career from beginner to advanced, terrible to award winning. I want to give people a better understanding of the terms we often use in critique, and to explore common issues in miniature painting with the aim of helping painters of all levels better assess and determine how to improve their own miniatures. I hope this also helps to illustrate some of the issues I outlined in my previous post Suggestions for Contest Entries, as I know people are already painting entries for this years ReaperCon MSP Open! 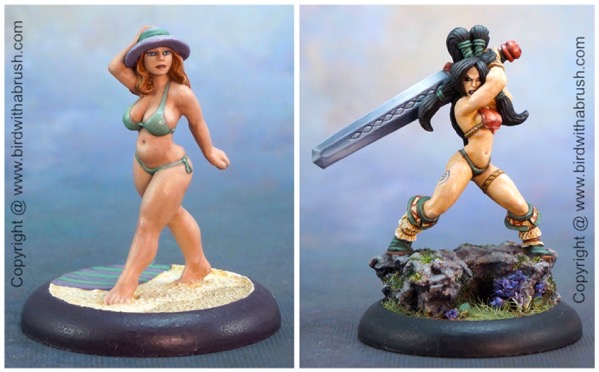 On the left side of the above picture is my painted version of Beach Babe Libby. On the right is Eriu, Champion with Greatsword. They have a lot in common apart from wearing bikinis. Both are sculpted by the talented Kev White. I used a similar colour scheme on both – pale skin, and a triadic colour scheme of red-orange, green, and blue-violet. I painted both of them in 2003, only a few months in time apart. Both were painted with the same stock of paints and brushes. Whatever they have in common, I think most viewers would agree that Eriu is the better painted figure. But why is that?

Some might look at Eriu and think it’s a superior paint job because it features bells and whistles like NMM (non-metallic metal) and a bit of freehand. Many would likely note that Eriu is painted with better contrast between darker shadows and brighter highlights. Those are definitely factors, but I think there’s a more fundamental difference than that between these two paint jobs. I digitally edited the photograph of Eriu to remove a lot of the contrast, dull down the NMM, and soften the lining, to in effect ‘paint’ Eriu in a manner more like Libby. Let’s compare this edited version of Eriu with Libby. 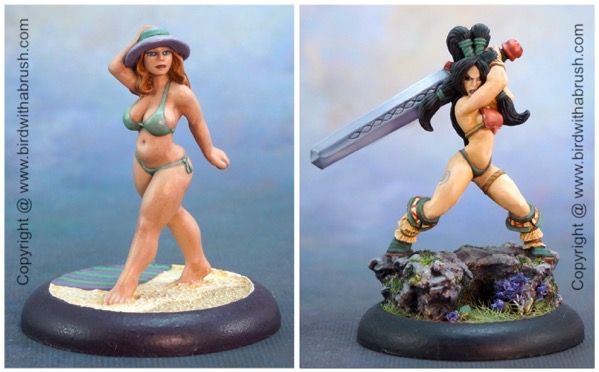 Even though her NMM is flat looking and her hair is dull, I would argue that this version of Eriu is still a better paint job than Libby. If you walked past the two of them on a contest shelf or game table, the Eriu figure would catch your eye more than the Libby figure. This is because Eriu is a better application of another type of value contrast – contrast between different areas of the miniature. If you squint your eyes (or shrink the pictures) and look at Libby, the figure kind of blends together visually. You can’t see a strong separation between the areas like her hat versus her face, her skin versus her bikini, or her feet versus the sand. The midtone colours used for the various areas of the miniature are very similar in value. (Value is a measure of how light, medium, or dark a colour is.)

The Eriu figure stands out better visually because the midtone colours of adjacent areas are different values. She has very pale skin and very dark hair. The green boots and bikini bottom and the copper armour top are middle values. So the skin, hair, and clothing all stand out from one another and help the viewer quickly spot what and where each area on the figure is. Giving the viewer that kind of information is the most fundamental job of a miniature painter (IMHO at least). Using value contrast in the midtones of adjacent areas on your figures is a simple and very effective tool you can use to make them much more interesting to look at!

Edit to add: I have received a few comments from people who don’t feel like they see any difference in the quality between these two, or who prefer the Libby figure. Part of the reason I chose these figures is because they’re so similar. Not just the figures, but the tools and general skill level used to paint them. We get very caught up in having the ‘right’ tools, or developing skills like blending and the ability to paint precise details. Those are important, but they are only half of the equation of creating visual impact. The other half is more to do with our perception and our judgement. Seeing subtle differences like this. Making judgements about which colours to use, in what values, and where to put those. It is just as important to build those skills as it is to work on your skills of handling brush and paint. It took me a long time to understand that and start working on it, but it is something that can be improved. At a certain point it becomes the critical skill that you’ll need to work on to improve your work.

If you are having trouble seeing much difference in some of these images, try this – step back from your screen or shrink the images down until you’re looking at them closer to the size of a miniature (a little over an inch or 30mm or so, these are fairly small.) This is the way most viewers will experience your work, you need to grab their attention and give them as much information about the miniature as you can at small scale/at a distance. This is just as important for display/contest miniatures as it is for gaming figures! You need to grab a judge’s attention at arm’s length to make them want to pick your figure up to look closer. (Or to put it another way – we know it’s tough to paint high contrast and subtle blends and details. That is why minis that pull off both score better!) 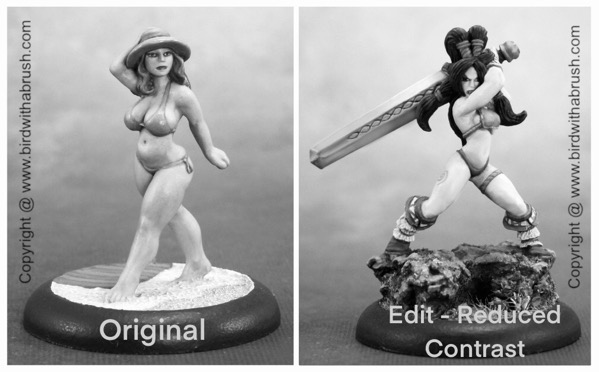 Another tip is to look at your work and make comparisons in black and white. We love colour, and it’s very easy for us to get distracted by it. But value usually has the most impact on whether a piece is visually effective, whether it’s using different values between regions of the figure, or using stronger contrast in highlights and shadows. I’ve added a comparison of the two figures in grayscale above. Hopefully it should be easier to see that the midtone colours of most of the Libby figure kind of blend together, whereas the various areas of the Eriu figure stand out more distinctly from one another.

There are times when it is not possible to use strong value contrast between areas. In those situations it is all the more important to use other tools like lining and stronger contrast between shadows and highlights. To add (or increase) lining and contrast are two of the most common pieces of feedback I find myself giving to painters after judging contests like the ReaperCon MSP Open. When possible, I show painters who receive that feedback an example of what I mean by comparing a figure like Eriu to one like Libby. But I think it might help people if they were able to compare what adding contrast and more lining looks like on the same figure. I have digitally edited this photo of Libby to provide an example of that. 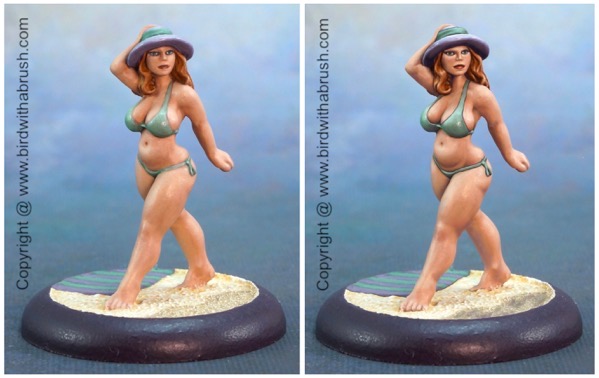 Let’s convert this one to grayscale, too. I think it helps us see how the lining and additional contrast make the figure ‘read’ more clearly. 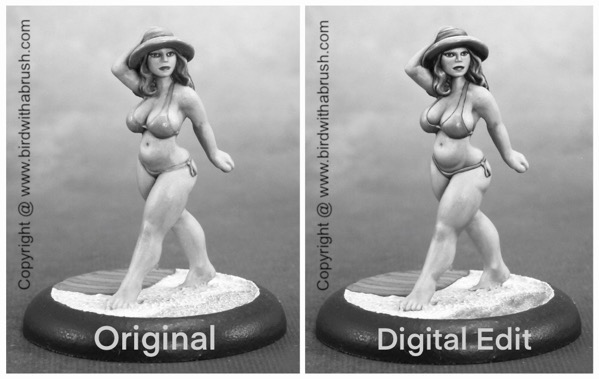 The revised version of Libby isn’t a gold medal paint job, and it would still benefit from stronger midtone value contrast between the different areas of the figure. But it does stand out more visually than the original. If you squint you’ll have an easier time seeing where one part of the figure ends and another begins. But which is more important, lining or contrast? 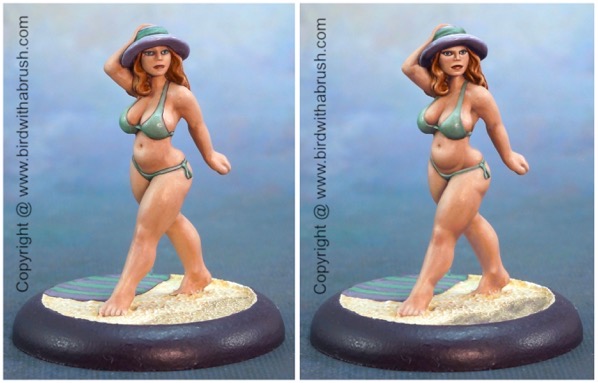 I made my digital edits of the lining and the contrast on separate layers so I could show each of the elements individually. The only change between the original paint job and the picture on the above left is that I added strong lining to separate areas like the skin and the bikini. The figure on the right has only the faint original lining I painted, but I digitally painted in additional highlights and shadows. Both at the lining and additional contrast improve the figure, but I think if you could do only one that the lining is most effective.

I know a lot of people who feel like blacklining/darklining is ‘unnatural’, but it is very helpful to the viewer on gaming scale figures. I would also argue that it is more natural than people often think since clothing or other items that overhang other items create a small line of dark shadow, but that’s an argument for another day. Thick black lines will have a cartoony or graphic novel feel. For a more natural and less obtrusive look, choose a dark value of one of the colours on either side of the area and use that for your lining.

I don’t as yet have a tutorial about executing the technique, but you will find plenty of lining tutorials on YouTube. One thing that helped me a lot was to paint the lining in after I did my basecoat, but before other steps. Then I could easily clean it up with the basecoat colour if I got sloppy in spots. If you do this, you will need to come back at the end and touch up a few spots where you lost some lining doing other stages of painting, but that tends to be a lot less nerve-racking than painting all of the lining at the end.

In case you’re curious, here’s is a picture of what the edits I made to Libby look like with the original photograph removed, so you can see only the parts I altered. Anything that appears grey is untouched. This might also help you get a better picture of the value range between the highlights and the shadows. My intent with the digital edit was to create something that was a better version of the original figure, not something painted in the style I would paint today. My digital talents are too limited to alter the picture to that degree! In case anyone’s curious, I made these edited versions on an iPad Pro using the Apple Pencil and the Procreate program. 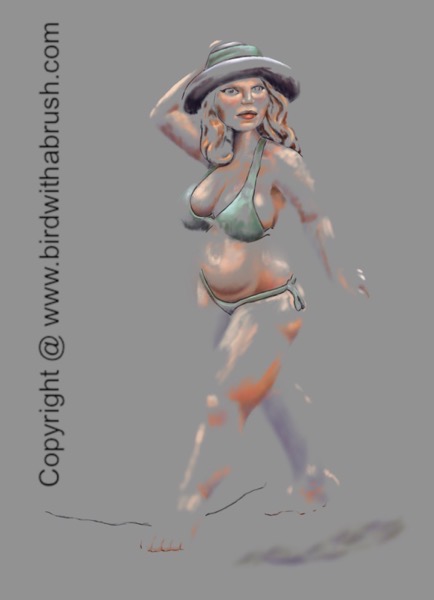 I also did a digital edit of improvements to Eriu, but if you want to see more about that you’ll need to come out to my class at AdeptiCon! 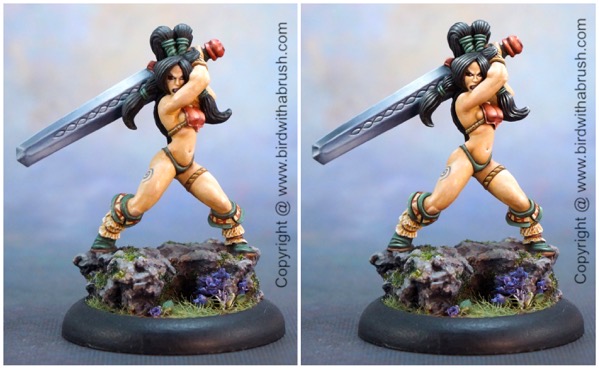 I’ve written a fair bit in past posts about how and why to paint with more contrast. Below are some links you may find helpful. You’ll also find pictures of a few miniatures I ‘edited’ the old fashioned way if you’d like additional examples of what more and less contrast look like on the same figure.

First, an example of what more contrast actually looks like on the same figure.

Let’s talk about the issue of contrast vs. realism.

The way we think as we paint can make it harder to paint more contrast (includes additional examples of what more and less contrast look like on the same figures.)

And finally some hands on tips for painting with more contrast.

3 thoughts on “Understanding Critique: a Visualization of Lining and More Contrast”