I got my hands on a Reaper Vex airbrush! You can check out this page for technical specs and a link to some helpful videos.

I gotta admit, it’s a sexy looking gadget. But can it possibly work as well for me as Aaron Lovejoy has claimed and demonstrated in his recent videos?

I took it for a spin to find out. I’m not a total airbrush novice, but I am the next thing to. My current airbrush is a GREX Tritium. It is a very well-made airbrush, and after an initial session or two of struggling to figure it out, I haven’t really had any problems with it. But I also haven’t really loved it enough to catch the airbrushing bug. Unless I’m painting a lot of smaller things in the same colours or painting something larger, it doesn’t seem worth dragging it out or, more particularly, cleaning it up after (and between colours). I don’t do either of those things very often.

One issue the Tritium has is I think it is more of a 1.5 action than true dual action. I’m going to have to give it a thorough cleaning and try again, but on previous attempts I was not able to get a spray of just air alone.

Villains from the Mice and Mystics board game. Painted in 2013. I really haven’t used my airbrush enough…

The last time I tried airbrushing with my Tritium, my compressor overheated and then I ended up not liking the colours I had picked. I started fixing it with standard brushes instead of dragging out the airbrush again. (My GREX airbrush is high quality, but I’m not so sure about my compressor… Though I have my water trap on my compressor, not on my hose as Aaron recommends, so maybe that would help.)

My GREX definitely came in useful for doing base coats and initial highlights on chonky baby dragons though!

Although I’m not very practiced with airbrushes, I have learned one tip to pass along. You need to know your brush well. You need to feel comfortable taking it apart, cleaning it, and putting it back together, because that’s how you fix most problems. So for my first session trying out the new Reaper Vex, I rewatched Aaron’s demo video and sat down to do only that. I had to go back and watch a section of video again because I didn’t remember how to reassemble the trigger parts after the first watching. I shot some water through it and called it a night. Whatever brand of airbrush you have, I recommend looking for some videos of people breaking it down and putting it back together again to have for handy reference. There are some videos of Aaron running through that process with the Vex.

I had a group of figures to prime, so for my next session with the Vex I started there. Just basic grey brush-on primer. (The figures are for a project I can’t yet reveal, so no picture, sorry. Also because of the nature of the project, I couldn’t try the zenithal prime method from Aaron’s videos.) It did not go well at first. I’m not sure what I had done wrong, but it was sputtering and reluctant to spray. I poured out the primer and cleaned out the brush. 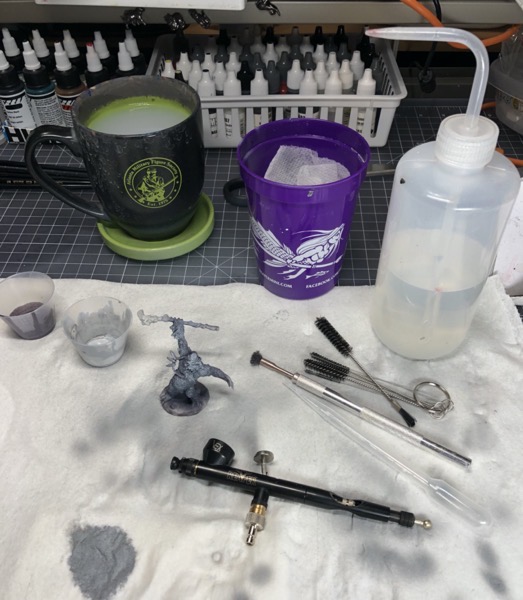 At the end of my first airbrushing session with the Reaper Vex. The grey blob is primer that got spilled when I knocked over one of those mixing cups. TOOL NOTE: The brushes seen below the water bottles are not recommended for use to clean airbrushes. Please see the comments section below for more information.

For my second attempt I decided to try some spraying some regular paint on a Bones figure since that’s easier to clean up than primer. This went much better! I gave the primer another shot, and that went well too! The Vex is light and sleek, so it seemed less cumbersome to put down and pick up and so on for the frequent tip cleaning (required with any airbrush when using acrylic paint), moving the minis around, refilling the cup, etc. I used the last of my grey primer to do a sort of zenithal prime on the Bones mini I had practiced with earlier to practice my aim with the Vex a little more. (That figure, which is in the picture, has a darker grey overall spray and then a light grey zenithal spray, so not really true zenithal prime. I was going to paint over it anyway so it didn’t much matter about the colours.)

I only used the larger needle since I was spraying primer, I didn’t switch to the fine needle and try that. The larger needle seemed to do pretty well with more targeted spraying, as well. I will need a lot more practice before I can do the sort of detail work Aaron shows off in his video, though! Tools are only one part of that equation. I’d have to do a more thorough comparison, but I felt like it was a little easier to aim for where I was spraying than I have found it with the Tritium.

I’m excited about the possibilities for airbrushing more often and more comfortably in the future. I had expected to have more problems with the dual action trigger, because I’m not very coordinated at doing multiple things at the same time. I was also concerned about whether the classic airbrush style of trigger would be an issue with my hands. The reason I bought the pistol trigger style GREX is I have some issues with pain in my hands and fingers. (I don’t know the exact issue, my doctor poked around a bit and gave up on it.) Using this traditional trigger style airbrush was more comfortable than I had expected! I suspect I’ll have days when it will hurt my hands, but being able to use it for a few hours on a good hand day is honestly more than I had expected. 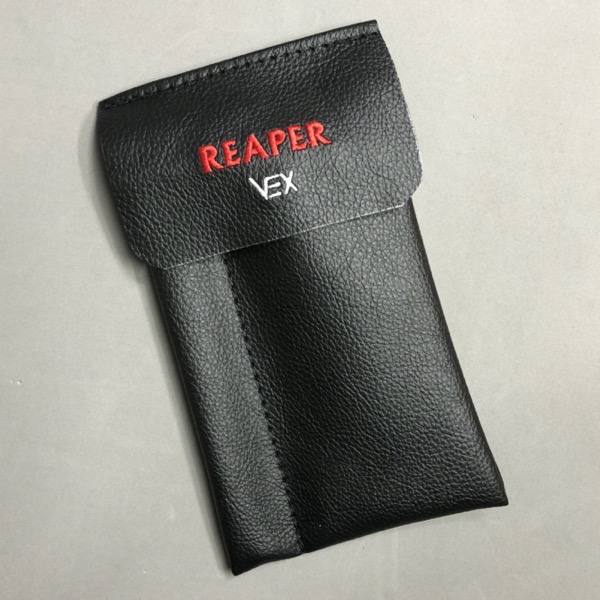 The pouch is more convenient for easy access home storage than the larger Reaper case or the plastic case of my GREX. Those plastic cases are great to have for safer travel and long term storage though.

I finished up the session by taking the brush apart to clean it. I’m not fanatical, I don’t typically use airbrush cleaner, but I like to be thorough in rinsing everything out with water and wiping/scrubbing it down before putting an airbrush away if I’m not sure how long it’s going to be until I next use it. If only I had such good habits with my wet palette. ;->

There are some features I miss from my GREX. The Vex paint cup is built-in, you have to choose small or large size at purchase. The GREX paint cups screw on and I can swap between three sizes depending on the needs of my project. The chrome of the GREX is very easy to wipe paint off of, though the plastic is decidedly less so. The Vex finish is in-between. Both come with a crown cap to protect the needle. The GREX came with two styles of crown. (The bit on the front that protects the needle tip but also makes it a little harder to see when aiming for precise application.) Both attach magnetically, which is very convenient. They also magnetically attach to the back of the airbrush to store when you aren’t using them. The Vex has a reversible cap, but in both orientations you have to screw it on. The GREX also has a magnetic cap for the paint cup. The Vex has a plastic cap. The paint cup caps on either get pretty messy if you use them (and many people do not), but it’s less messy than tilting your brush and spilling paint all over. The GREX came with a printed instruction booklet that lists the part numbers of replacement parts and is very thorough in instructions for cleaning. It was still super helpful to watch videos of someone breaking down and reassembling the brush, but it’s handy to have that printed reference.

My GREX Tritium. A wealth of paint cups. The fitted case is nice, but only the bottom is fitted. The top is clear plastic and not snug to the contents. So for travel and storage I have to add bubble wrap padding.

Both the Vex and the GREX have a nice feature for those of us who are newer to airbrushing. You can set a ‘brake’ that limits the maximum volume/pressure of spray. If you twist the knob at the back of the brush, it limits how far you can pull back on the trigger. So if you’re doing delicate detail work you can set that to ensure you don’t shoot a really strong spray by accident.

The soft case has a main pocket for the airbrush, and a second pocket for the other needle. The Vex ships with both needles. My GREX can accept multiple needle sizes, but I would have to swap out the nozzle as well as the needle every time I wanted to switch. (And buy the other size nozzle and needle.) With the Vex you just need to clean out the paint and swap the needles and you’re good to go.

Although my initial attempts went pretty well, I’m also well aware that I don’t really know what I’m doing. How do I actually get good at this? What can I use it for apart from priming and base coats? I decided the most effective way for me to learn would be to sign up for the Miniature Monthly airbrush class with Aaron Lovejoy. It gave me four sessions of instructions, and homework assignments that left me feeling a lot more comfortable using this nifty new tool. Miniature Monthly has recordings of that sessions available for purchase. This also includes access to the next live sessions in October 2021.

Has anyone else picked up a Vex airbrush? How are you liking it so far? Or are any of you signed up for the Miniature Monthly classes? (They also have a cool Patreon with information on lots of different painting techniques.)

NOTE: My information about both the Vex and the GREX should be considered first impressions rather than in-depth reviews. I am not an experienced enough airbrush user right now to write quality in-depth reviews, and even if I were, I haven’t used either enough to do a true review.