One of my goals as a teacher of miniature painting is to encourage people to do more experimentation and testing. Willingness to experiment means willingness to spend time that might not result in a finished miniature. It also means potential failure in the sense of ending up with results you aren’t happy with. In the short term, both of those are somewhat painful experiences, so I think a lot of us just end up sticking with what we know works. In the long term we are missing out expanding our repertoire of tools and techniques that we could use on other miniatures.

I want to note that I am also one of the people I need to encourage with this message of openness to experimentation! So for my first show of Beyond the Kit I thought I would try something I’ve never done before. I chose to explore the effect of different wash colours on a figure. For the benefit of those who prefer a quick read, I’m going to share some pictures and thoughts about the experiment here. This technique may also be of interest to people who paint figures in number, as this ended up being an easy and relatively quick way to add some differentiation to individuals in a group of figures without adding a lot of extra steps and work.

My test subjects bravely lined up to get their experimental washes.

First something of a confession – I never really did a lot of washing and drybrushing in my early years of painting. I gave it a try on my first few figures, but I got frustrated because washes didn’t seem to work the way it sounded like they should. I didn’t understand at that time that although the wash would concentrate in the depressions, it would also tint the entire surface. I had been reading up on the layering technique, so I tried that instead. I understood it better, so I ended up focusing on that and not bothering much with washes and drybrushing for years outside of base textures. I circled back around to it, and I’ve since seen people do some amazing things with washes, but I didn’t have that foundational experience with them that most painters have. (At the time that I started painting there were no easily available videos to watch to see how something like washes works!)

Not long ago I had had a painting experience where the choice of wash colours ended up having a significant effect on the end appearance of the figure, and I thought that might be something fun to do experiments with. I concocted an experiment where the wash colour would be the only variable between the figures. For the non-variable elements I chose to use a figure and colours from the Core Skills learn to paint kit, since those are familiar to a lot of people. The figure was the Skeleton Archer. The paints were Desert Sand for the base coat, and then Pure White for additional highlighting. (The kit uses Solid White, but I couldn’t find mine during the stream and the true white paints are pretty similar.)

If you want to try an experiment like this, any skeleton figure will do. If you don’t have Desert Sand any light grey, cream, or tan paint colour should work pretty similarly. Here are some examples of substitute colours.

Since I was painting basecoats on seven skeletons, I used my Vex airbrush to apply the paint, but two coats by brush should give a pretty similar result. I also brush painted a base coat of Naga Green onto all of their bases. I want to perform a similar experiment with the more saturated green, since I suspect the effects will be different over neutral versus more saturated colours. There wasn’t time in that episode, but I hope to return to that experiment another time.

Next I picked out some paints to test as wash colours. The Core Skills kit uses a dark grey colour. I chose the colours below to test as alternates. The swatches you see beneath each colour are painted from the washes I mixed during the stream, so you can also get an idea of the wash consistencies I used or compare to similar colours you might have in your collection if you want to try this experiment yourself. I have demonstrated how to mix and test wash consistencies elsewhere.

The paint colours I used for the washes, with swatches of each of the wash mixes.

Like any scientist, I had some ideas about how each of the colours would behave, because I’ve been working with colour for a while now. Do not fret if you do not have much colour knowledge at this point! You can study colour information. You can also just do experiments like this and mix random colours together to study what happens in the real world and begin to build up your own personal bank of knowledge.

Solid Black: I expected this to be too harsh and stark.

Russet Brown: I like this colour to shade ivory and parchment, and thought it might give a yellowed ivory appearance.

Rich Leather: I figured this might be kind of similar to the Russet Brown, but a little lighter and more yellow. Maybe too yellow or too light.

Clouded Sea: I suspected this would look weird, but thought it might work for a sort of ghostly glow.

Gutter Grime: I also suspected this would look weird, but wanted to try it for the potential of a moldering old bones look.

Naga Green: I expected this to look ridiculous, but wanted to test with a very saturated colour to compare to the others.

I mixed and applied the washes on stream, so I don’t have in progress pictures of that. Below is a picture of the palette of mixed washes with the wash colour choices shown in the above listed order from the Black to the bright Naga Green. 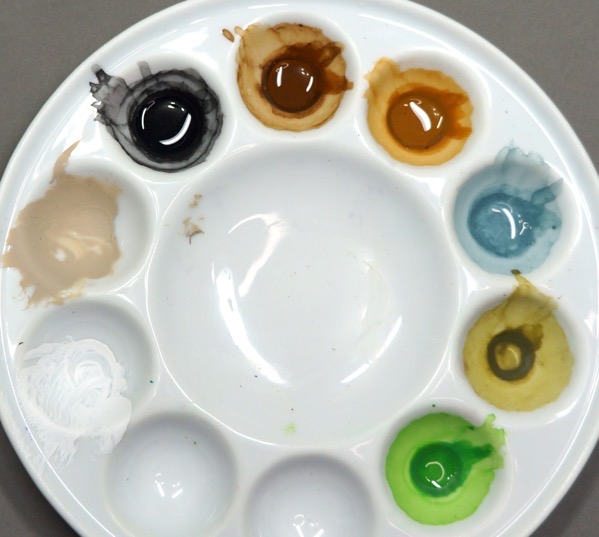 The mixed washes are above, in the positions of 11 to 5 on the clock. The basecoat and first drybrush step was Desert Sand, seen at the 10 o’clock position. The final drybrush step of Pure White is shown at 9 o’clock.

I also don’t have pictures of what all the figures look like with just the washes. However, I did want to give you some idea of how dramatically the appearance of the figures changed between just a wash and then after they were drybrushed. I repeated the Naga Green wash on another copy of the figure and took a picture of it next to the figure I painted on stream that had the Naga Green wash followed by drybrushing with first Desert Sand and then Pure White.

Just the basecoat and wash on the left, with two colours of drybrushing on the right.

Once the washes were dry I began the drybrushing steps. I used the same colours and procedure as I did in the Core Skills kit: first Desert Sand, and then white. Below you can see the figures after all steps were completed. On the far left is a figure painted with the Core Skills wash colour of Mountain Stone for comparison purposes.

The wash colours absolutely made a difference, but in some ways a less dramatic one than I had expected! Pretty much all of them worked. There’s another picture below where you can see them from a different angle that might show the washes a little more dramatically. I also want to share my conclusions to compare them with the expectations I listed above.

Mountain Stone: This figure painted with the Core Skills instructions is an example of a standard type of grey bone look and serves as a comparison for the others. The control of my experiment if you will.

Solid Black: It’s a little stark for my personal taste, but less so than I expected. It would look great in a tabletop game. I suspect black as the wash for a white robe or dress or some other more flowing type of sculpted material would not look as good as on the nooks and crannies of the bones, however. It is hard to get most surfaces to read as white if you wash them with a very dark colour.

Russet Brown: I don’t dislike this result, but it did not end up with as much of an aged bone/ivory effect as I’d expected or hoped. To achieve that with Russet Brown would probably require changing the basecoat and first drybrush colour to something a little more yellowy.

Rich Leather: The stronger yellow brown colour of this created more of an aged bone/ivory effect than the Russet Brown. It was a bit too light in value (or I diluted it too much) to bring out all the details, especially for the tabletop.

Clouded Sea: The surprise hit of the stream! Viewers in the chat really liked this one, and so do I. The end effect is pretty subtle. I think the idea of a ghostly type animated skeleton effect would work. I would probably use a slightly darker colour and maybe include some blue in the basecoat/first drybrush colour to heighten the effect a little.

Gutter Grime: Another unexpected success. It gives a subtle mouldy effect. I think this also needed to be a little darker in value to better pick out all the details, particularly for tabletop viewing.

Naga Green: A little more dramatic than the Guttergrime, but not as ridiculous as expected. It would work for a look of grown over with moss, animated by necromantic magic or radioactivity or something. If I were painting a figure like this I would not use the same colour on the base, however.

NOTE: The texture of skeletal bone is unique to a lot of other textures. I suspect this kind of experiment would have a different effect on a finer texture like fur or scales, or a smooth surface like cloth folds. Let me know if you’d like to see me try an experiment like this on other textures! 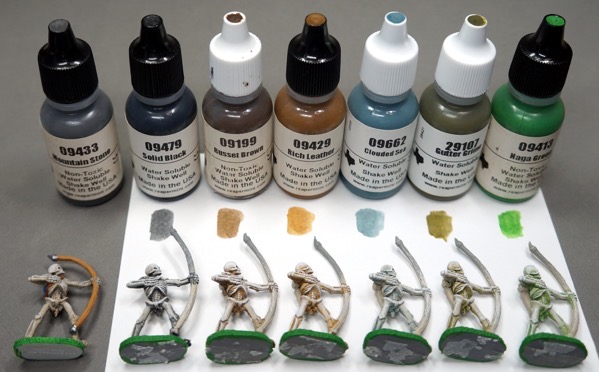 The classic Core Skills colours are shown on the figure to the far left. The other figures are lined up next to the colours that were used to paint their washes.

I hope this gives you an idea for some fun experiments you can do with washes in your own painting!