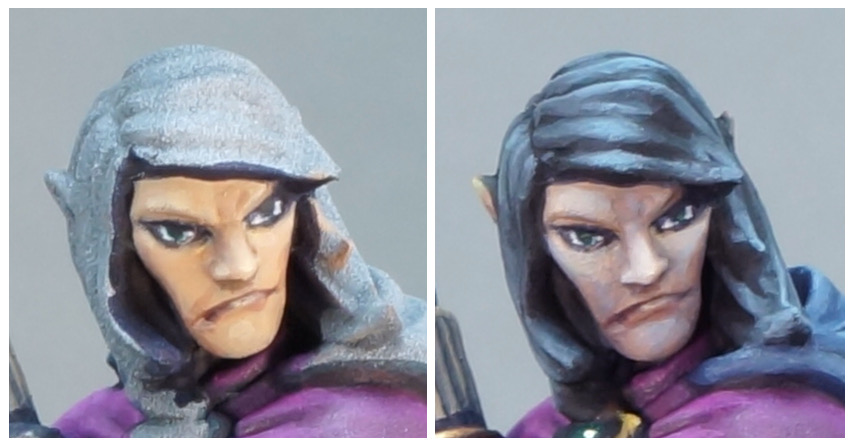 The Patreon supporter PDF version of this article includes additional photographs. Ko-fi tips are another way to help keep this content freely available to everyone.

In a previous post I discussed the preparation and planning that went into painting Reaper’s promotional dungeon delving adventurer party, and I shared pictures of the group. In this post I want to share my process for painting the elf wizard figure, as well as the colours I used to paint him. Articles about the human rogue, the halfling fighter, and the dwarf cleric are also available. The final article about this group of figures will be a look at some of the factors that go into painting source lighting effects, and how you can paint them to look much more dramatic than I did with these figures. 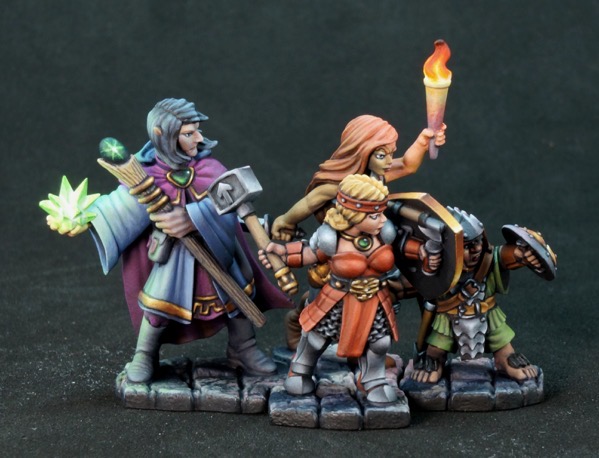 I had decided on the colour for the spell effect and had considered desaturated blue as a main colour for the wizard before I began painting any of the figures. However, once it came time to actually paint the wizard, I realized I was going to need other colours! If it weren’t for the lighting effect, using different values and/or slightly different hues of blue for the robe and the cloak might have worked. To paint a lighting effect requires using a full value range of a colour, concentrating the lighter values in the areas being hit by the light, and darker values in shadowed areas. Had I tried something like a darker blue robe and lighter blue cloak, it would have been challenging to distinguish those two values while also showing the range of values between lit and shadowed parts. For me, at least. (Value is how light or dark a colour is.) 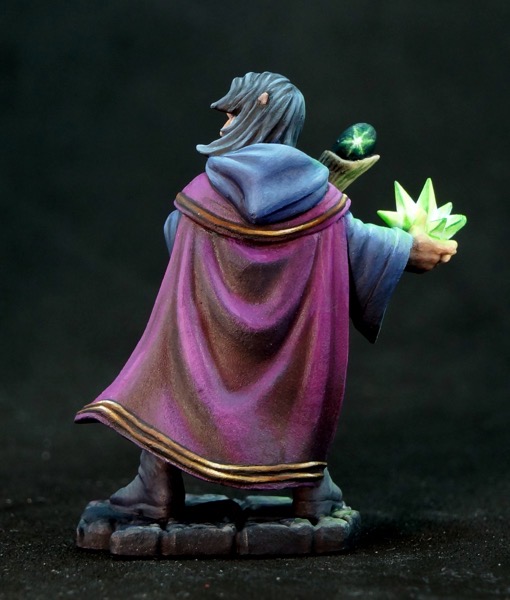 So I had to come up with some additional colours! I think all of the decisions I made for the wizard work well for that figure on its own. Magenta is a complementary colour to the green of the spell effect, and magenta and purple colours are often used for magical and mysterious things in painting, so it works with his characterization, as well. The reflected green light effect works really well on the grey leather accessories and blue-black hair. However, as I mentioned in the previous article, the wizard’s colour scheme does not completely mesh with the colours used on the other three figures. The blue works, as it’s similar to my universal shadow colour. One thing I could have done to tie him in better with the other figures would be using some of the tan or cream colours on the other figures for his leather accessories instead of introducing a new colour. The magenta colour appears only on this figure, it might also help to use the darker magenta in some of the shadow areas on colours of the other characters. 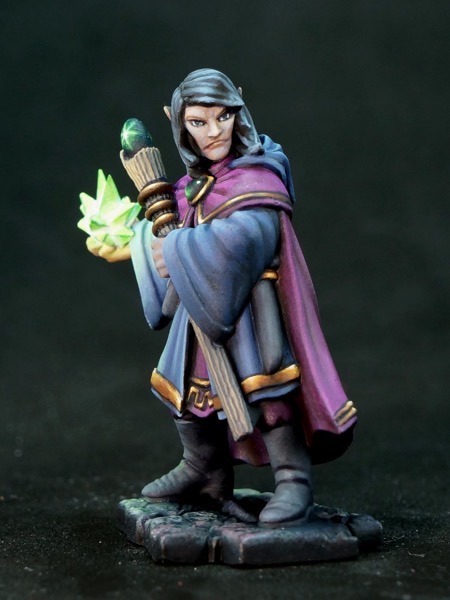 Contrast levels can be a bit of a tightrope on an OSL figure. The typical push for strong shadows versus highlights contrast has to take a bit of a backseat to the need for strong contrast between lit areas versus shadowed areas. When I reassessed my first pass on the cloak of the wizard, I felt it needed at least a little more shadow-highlight contrast to bring out the shapes of the cloth. This change is pretty subtle, but if you look at specific areas of the cloak, you should be able to see it. Look at the wrinkles around the gem on the front view, and the shoulders on the rear view. Had this not been a light effect figure I would have bumped the contrast up even more significantly.

I painted the face later in the process, which is unusual for me. I usually like to paint the skin first. It helps me engage more with the character during the painting process. Once I did paint his skin, something about it nagged at me. It just didn’t seem like it fit in with the rest of the colours on the rest of the figures, nor the light effect. I thought it was too light in value, but I wasn’t sure if that was the issue, or the only issue. I kept working on the rest of the figure, and let my background thoughts simmer on identifying the problem and possible solutions. As I was finishing up the last parts of the painting, I decided that the skin definitely was too light, but also that the skin colour was too warm. His face isn’t receiving much light from either light source, and all of the other colours on the figure are cool.

When I realized what I didn’t like about the skin, I didn’t just immediately repaint it! In situations like these I usually start by trying to use glazes to shift the colour and only repaint everything as a last resort. Once you’re comfortable with the technique, glazes do not take a lot of time to mix or apply. So if you can fix an issue with glazes, it can save you a lot of time reworking, even if you need to touch up highlights or shadows a little. In this case, I was much happier with the skin after the glazes. Even had the problem been only that the skin was too light, I would have first tried painting in more shadows rather than repainting everything and starting from scratch.

I desaturated the comparison photo so you can see that the revised version is is a little darker, it’s not just a colour shift. 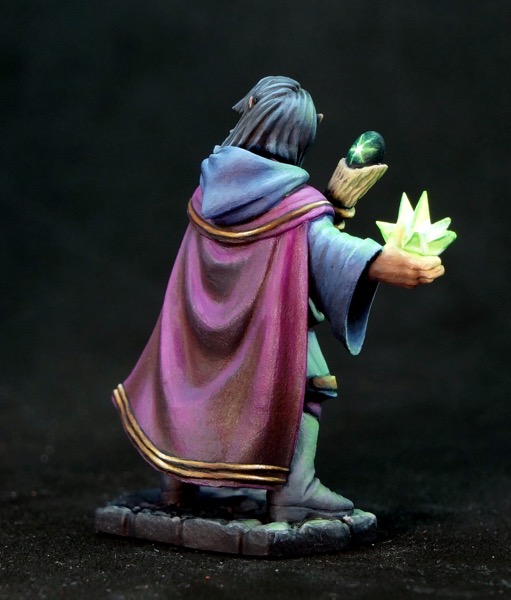 Since I was already dealing with light effects and deadlines, I did not want to add on the challenge of trying to figure out how to paint a large free-standing gem to appear as transparent. But the stone in the wizard’s staff was large and prominent enough that I felt like it needed a little something. I settled on the idea of painting it as a star sapphire. While sapphires are generally thought of as blue, they occur in a range of colours. Green star sapphires are quite rare, which seemed perfect for a wizard. I used a smaller finely pointed brush and began by painting the lines in a slightly lighter green. Once I was confident about the positioning, I added lighter and lighter mixes of green to the centre of the lines, and then a bit of white at the intersection where they meet. I used a medium value but highly saturated green to add more colour around the star and soften the edges of the lines a little, to help the star look more like it’s incorporated into the gem rather than being painted on top.

I explained how I used primer to create a roadmap for the lighting in the overall process post. I took photos of the primed figures individually and as a group so I could use them as a lighting reference if I painted over an area but then later needed to check my lighting placement. I took pictures from numerous angles, I’m just showing a few of them here. When it comes to reference photos, it’s better to take too many than too few!

This priming technique provides an excellent overall feeling for the location of light and shadow. However, it does not take into account the way different textures and materials appear, and how they react to light – matte cloth versus somewhat shiny leather versus reflective metal. To best evoke the qualities of those materials requires the painter to use the primer (or lighting reference photos) as a guide, but to then extrapolate and tweak value ranges and value placement to match various types of materials. For example, if you compare the areas I painted as metal on the figures to the photos of the primer stage, you’ll see a number of differences in where the lightest and darkest colours are placed because I was trying to simulate the reflective appearance of metal. 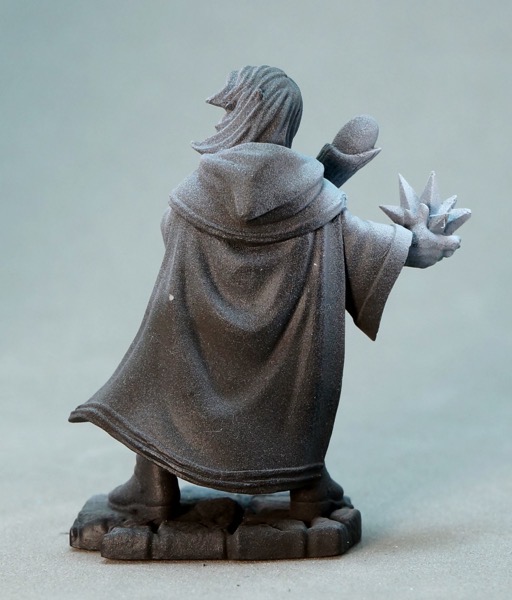 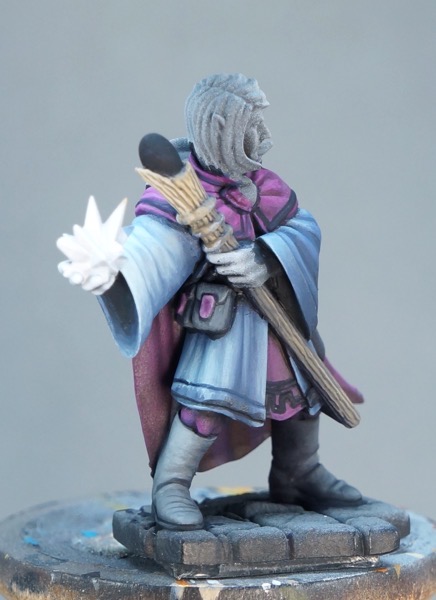 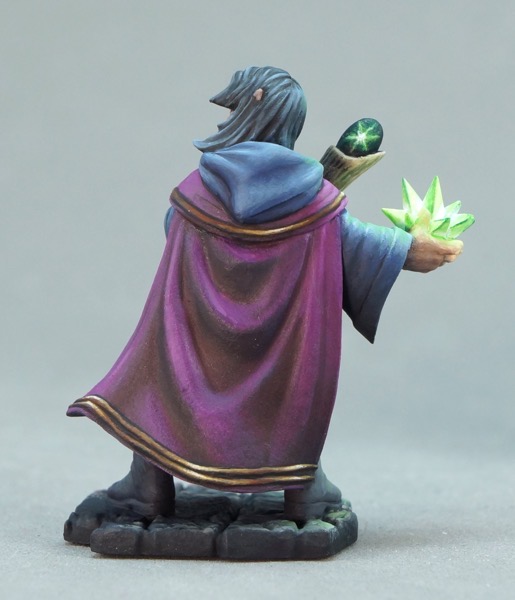 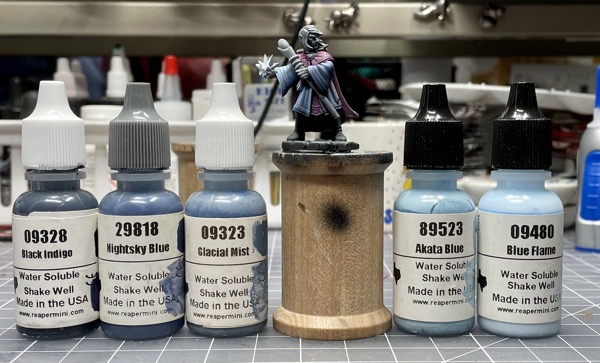 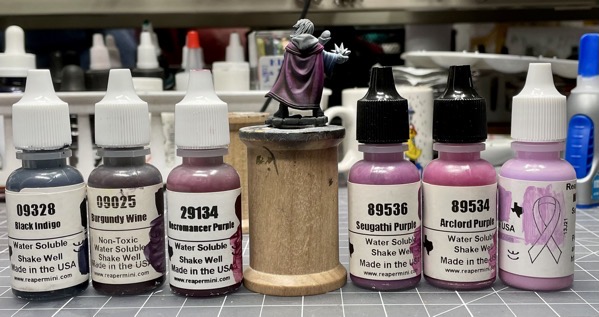 Wizard staff colours:
These include colours used on the weapon handles of the dwarf cleric.

Wizard initial skin colours:
As described in the process section above, I later mixed a glaze of some cooler colours and painted that over this first skin colour to make it cooler and darker. 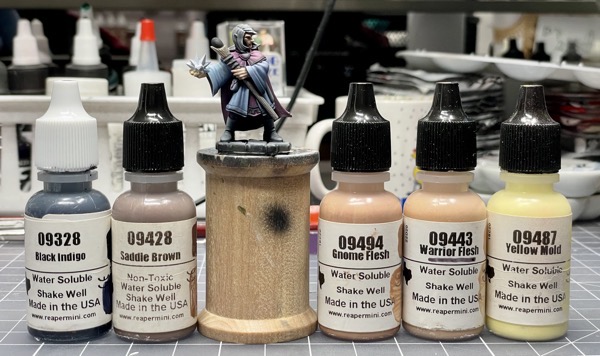 Wizard spell effect and star sapphire colours:
These colours were also used to paint the gem in the cleric’s necklace. 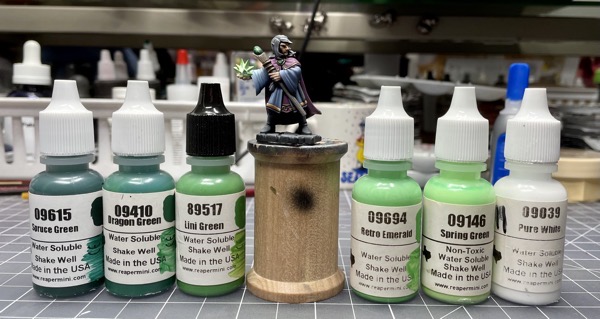 Wizard hair colours:
These colours were also used to paint straps on the cleric’s sabatons.

How to Get this Figure

The adventure party figures and a dungeon dwelling goblin are teasers for Reaper’s Bones 6 Kickstarter: Tales from the Green Griffin, which is running until the end of April! A random selection of one of the five figures is still being added to most Reaper Miniatures orders. One of the five was included in the swag bags for AdeptiCon, and there may be other giveaway opportunities where you can obtain one or more of these figures. If you are interested in these figures but are not able to receive a free one, or you’d like to ensure you get all of them, they are included in the Kickstarter core pledge level. I expect that they will go into retail sales channels at some point after the Kickstarter pledges have been fulfilled, but it will be several years until that happens.